First of all, this does not count as Day 1. This is an introduction.


It's a new month and due to a last minute change, July will officially be my Jainism month. I was originally going to do Mormonism, but I wanted a take a break from the Christian backbone and bringing the Jains into my life does just that.


I always have a hard time introducing new religions. There are scores of books and information dedicated to simply introducing religions, so my mini-intro never really gives that much solid info on each one, so I think I'll add a link on the sidebar that should cover it. If this project ever makes it onto paper, then perhaps I'll have to rework the background, but for now, let's just copy and paste from BBC.


Jainism at a glance

Jainism is an ancient religion from India that teaches that the way to liberation and bliss is to live lives of harmlessness and renunciation.
The essence of Jainism is concern for the welfare of every being in the universe and for the health of the universe itself.
Most Jains live in India, and according to the 2001 Census of India there are around 4.2 million living there. However, the Oxford Handbook of Global Religions, published in 2006, suggests that census figures may provide lower than the true number of followers as many Jains identify themselves as Hindu. The Handbook also states that there are around 25,000 Jains in Britain.
Alright, so now you've got a little bit of a back ground, let me tell you what I'll be up to this month. As it mentioned above, there are five vows which every Jain must live by. 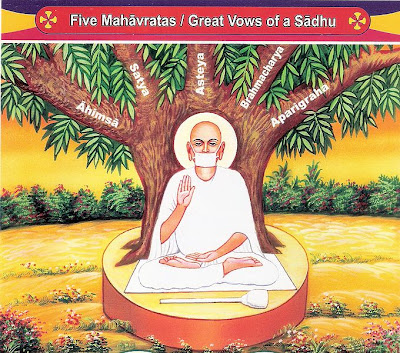 Unlike my Buddhist month, I am going to live officially as a lay Jain.

The Anuvratas are known as the Lesser or Limited Vows:

The Gunavratas are known as the Subsidiary Vows:

The Siksavratas are known as the Vows of Instruction or Discipline:
***
It's always hard for me to start on new religions, so I'm going to spend most of the day studying, preparing texts and meditating. I'll obviously adhere to the vows as much as I can today, but I have yet to formulate exactly how my days are likely to go.
The core concept of this religion seems to be that of non-violence, asceticism, and spiritual liberation with an ultimate goal of freedom from the karmic cycle which will lead to enlightenment. I'm liking what I'm learning so far, but it looks like this one will take a lot of personal sacrifice.
It's easy to copy and paste rules and make the claim that I'm going to follow them, however, it's really hard to simply alter my life just like that. I've devised a plan of attack to assist me.
First of all, since eating is huge part of life and I should technically only eat when its offered to me, I have decided to reduce my foot intake as well as my resource consumption by not carrying any money. I work close enough to my house if an emergency were to happen, so that won't be a problem. As for meals, my wife and I are going to work out an offering system so it doesn't turn into a master-slave relationship. I'm not into that.
I've also decided to shave my head this weekend. I'm doing so because if I were to keep my hair, I know that I would be distracted by it and this month places such a huge emphasis on detachment, that I think it's time that I move beyond my fear of haircuts and my absurd attachment to it.
So rather than rambling on and on about my plans for this month, let me just say that after work, I plan on going home, riding my bike with the dog for about an hour and meditating for an hour or so. I have a lot of reading to do and have to memorize my new mantra.