The very basis of Jainism is self-denial. Today is the start of my final week as a Jain and self-denial has been pretty darn hard. Denying myself the use of money, option of purchasing items, clothing, cooking, cursing, drinking, meat, fish and traveling have been pretty hard. In Korea, I'm  often duped into eating meat even when I ask for no meat. At many restaurants, the owners will toss my request to the side and instead tell me that "it's better with meat in it" rather than respecting my wishes. It's been hard, but following the Great Five Vows has been rewarding thus far.


Self-denial is the act of denying things that the self wants. Denying the self is much different and just the other day, the queen of living in denial made her way into the headlines again.

Rather than moving on or admitting her mistake, she dug in.

This woman lives in clear denial of who she is and what she really stands for. She is asking us to celebrate dishonesty and manipulation whenever she gets caught in a lie or deception. The Five Great Vows of Jainism are simple. They are a renunciation of 1) killing living things, (2) lying, (3) greed, (4) sexual pleasure and (5) worldly attachments. Palin lives in violation of every single one of these. She kills animals unnecessarily; she lies; she's greedy; has conflicting ideas on sexuality; and doesn't shy away from flashing her material assets.


The danger with people like her is that her modus operandi is easy to mimic and even easier to follow. Take her Facebook page for instance. 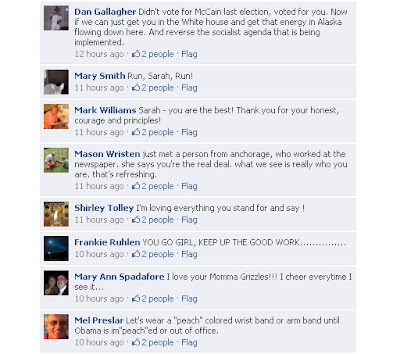 Look at what Mark and Shirley said. They admire her "honest[y]" and what she "stands for". From a Jain perspective, she represents pure evil. From a Christian perspective, she represents the same. However, "representing" something and "standing for" something are much different. Palin claims to stand for a lot of things and that is what people like and attribute to her, but she actually doesn't represent any of those things.
I think there's a lesson in here though.

I personally don't think Sarah Palin is evil. I do, however, think she's a dangerous leader insofar that she doesn't know her true self at all and that ignorance--whether it's willful or not--creates this faux-reality where she can represent some of the most evil and despicable ideals in this world, yet appear to be stand for what people think is admirable.


Here's an example: A person can stand for the idea of marriage and since they perhaps have been "happily" married for over forty years, people believe that it's true and rarely seek any more information. However, if you were to ask that person why he is "happy" or even his wife about the details of their relationship, another story might emerge. In fact, he might turn out to be Larry Craig.


Sarah Palin claims that she stands for abstinence-only education. People see that and assume she stands for a more conservative approach to sexual education and some Christians might even believe that she is on their side. However, a closer look at that stance conflicts with the reality which is that she knew her teenage daughter was having sex in her own house and chose to do nothing about it until it was time to collect politically.


Living in denial is pretty dangerous, Sarah.
Posted by George at 8:33 PM

Email ThisBlogThis!Share to TwitterShare to FacebookShare to Pinterest
Labels: Jainism